Google Stadia app is now live in the Play Store

Stadia, Google’s upcoming game streaming service for almost any device including Pixel phones, is less than two weeks away from its official launch. Ahead of the November 19 launch, the Google Stadia app for Android is now available for download in the Google Play Store.

The Google Stadia app, which will be available for both Android and iOS, will be the primary way to buy games, manage your Stadia account & controllers, and begin gaming on your Chromecast Ultra.

Booting into the newly launched Google Stadia app from the Play Store brings you to a splash page, prominently featuring Destiny 2. Selecting “Get Started” first prompts you to select an account, then causes a loading popup dialog that cheekily states that it’s “Waking up the GPUs.” Other fun gaming quotes like “Building Rome” and “Reticulating Splines” have also been spotted by readers.

Soon after, you’re asked to confirm your Google Account selection, as you cannot switch accounts later. Once you’ve confirmed the account, you’re brought to a screen that will allow you to enter the invite code from your Stadia Founders or Premiere edition kit or from a friend’s Buddy Pass. Without an invite code, you’re not able to dig any further into the Stadia app’s features.

The Play Store listing for Google Stadia reveals a bit more about the app’s UI though. The main “Home” tab will display your games, each overlaid with a large play button. The previously unseen “Explore” tab looks like it will show relevant community posts. At the top of that page, we also see icons for YouTube, Reddit, Twitter, Facebook, and Discord.

Our APK Insight team has given the Stadia app a quick look over and determined that Google seems to have chosen to build it in Flutter, Google’s cross-platform app SDK. This means that the iOS version should offer a near-identical experience to what we’re seeing on Android today, once Stadia launches in the App Store.

Update 11/8: Today, the UI Engineering Lead for Google Stadia, John McDole reached out to confirm that the Stadia app is indeed built upon the Flutter SDK. Apparently the Stadia team began working with Flutter more than a year ago when the Stadia app was in the prototype phase.

Google Stadia app is now live in the Play Store 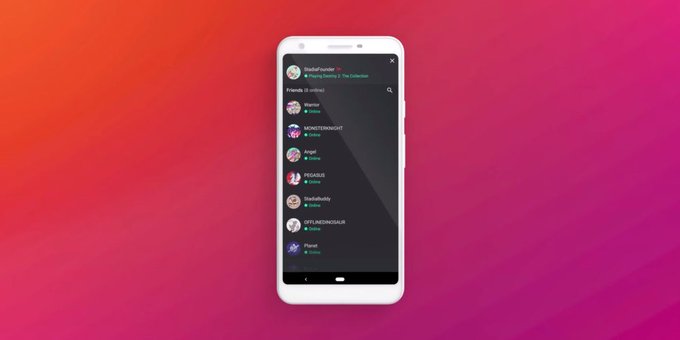 While Flutter has also recently gained support for creating apps for other platforms like web and desktop, McDole tells us that Flutter is currently only used for Stadia’s mobile app, at least during the launch period. As we suspected, the Stadia app for iOS will also be powered by Flutter.

If you were hoping to download the Android app on your Chromebook and manage your Google Stadia account that way, you’re unfortunately out of luck for the time being. Google has barred Chromebooks from downloading the app from the Play Store.

Interestingly, despite the fact that this is the first version of the Stadia app to be publicly available on the Google Play Store, the app has a somewhat high version number of 1.45.278447916.

Google Stadia launches on November 19th for those who preordered the Stadia Founders Edition or Premiere Edition bundles from the Google Store and those who receive a Buddy Pass from a Founder. Stay tuned for the latest Stadia news and tidbits ahead of the launch.